Introduction Class and Objects in Java

WHAT ARE A CLASS AND A OBJECT IN JAVA? AND WHAT IS THE DIFFERENCE?

Why are classes and objects important ?

Programming is about being able to create a model of reality. In fact, a program is several small building blocks (objects) that together build large programs. This is what is called object-oriented programming, in other words, a program consists of several objects that work together to solve a task.

In fact, a program is several small building blocks (objects) that together become large programs

You say you want a certain kind of so called abstraction in programming. In other words, you don’t want to code something that does the exact same operation somewhere else. That’s why you create classes and objects. The idea is that each class should manage their part of the program and be completely independent of each other.

WHAT IS THE DIFFERENCE BETWEEN A CLASS AND AN OBJECT?

At first it could be quite difficult to understand the difference between a class and an object. Therefore, in the following chapter we will go into details about what classes and objects are and how to create them. But broadly speaking, the difference is:

Classes: determine the features (methods) and attributes (characteristics) an object should have.

Object: consists of the information that describes the properties and attributes specified in the class.

EXAMPLE ON A CLASS AND AN OBJECT IN JAVA

Imagine that we wanna program a cat – a class called cat. A cat has certain characteristics, such as being able to scratch or run. A cat also has certain attributes, such as a name and a color. In this example, the cat cat has two methods: scratch and run. It also has two attributes (states): name and color. 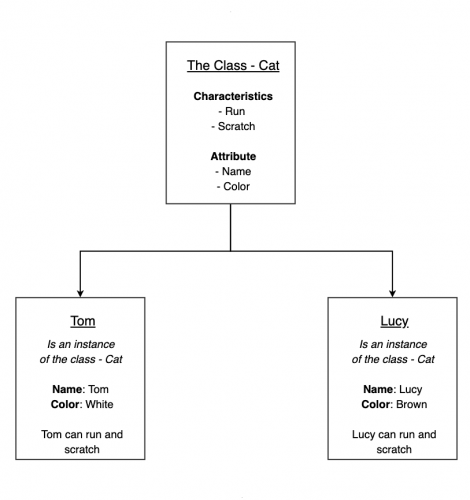 Summary: Introduction to Classes and Objects in Java

Now we have looked at an introduction to classes and objects in Java, and why these are important.

On the coming pages we will go into detail how to create classes and objects and what to consider. Furthermore, for more technical and specific information about Classes and Objects in java we recommend the Oracle website